Dr Jan Wright, Parliamentary Commissioner for the Environment (PCE), claimed in her 2011 public report “Evaluating the use of 1080: Predators, poisons and silent forests” that 1080 had been rated as “moderately humane”. This term can now be found shortened to “humane” when you browse some official poisoning documents such as Assessments of Effects.

Of all the official misrepresentations of 1080 this one seems to reach the lowest moral ground of all. Video footage and research indicates that for animals poisoned by 1080, effects are severe and prolonged. In fact, that was exactly the finding of the research that PCE Wright was referring to.  It was a 2010 report commissioned by the National Animal Welfare Advisory Committee (NAWAC).  The report stated that when assessing pest control, the word “humaneness” regarding a killing technique should be replaced with “relative animal welfare impact”. Using this assessment, 1080 was rated as having an “intermediate welfare impact”, compared to other killing methods, because it had a severe welfare impact lasting for hours. Cyanide had a relatively lower rating, because it caused rapid loss of consciousness and death. Anticoagulants such as brodifacoum were rated higher, because they caused a severe to extreme welfare impact lasting for days to weeks. 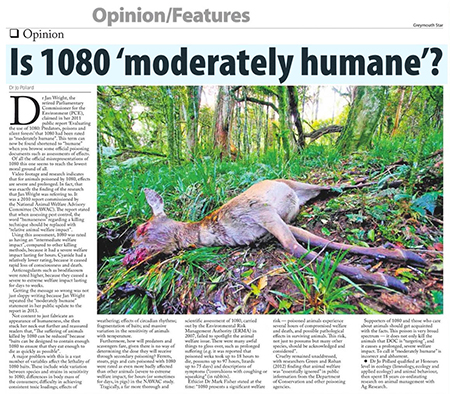 Getting the message so wrong was not just sloppy writing because PCE Wright repeated the “moderately humane” statement in her public update to the report in 2013.

Not content to just fabricate an appearance of humaneness, PCE Wright stuck her neck out  further and reassured readers that “The suffering of animals killed by 1080 can be reduced” because “baits can be designed to contain enough 1080 to ensure that they eat enough to die as quickly as possible.” A major problem with this is a vast number of variables affect the lethality of 1080 baits. These include wide variation between species and strains in sensitivity to 1080; differences in body mass of the consumers; difficulty in achieving consistent toxic loadings; effects of weathering; effects of circadian rhythms; fragmentation of baits; and massive variation in the sensitivity of animals with temperature. Furthermore, how will predators and scavengers fare, given there is no way of determining the dose they will receive through secondary poisoning? Ferrets, stoats, pigs and cats poisoned with 1080 were rated as even more badly affected than other animals (severe to extreme welfare impact, for hours (or sometimes for days, in pigs)) in the NAWAC study.

Tragically a far more thorough and scientific assessment of 1080, carried out by the Environmental Risk Management Authority (ERMA) in 2007, failed to spotlight the animal welfare issue. There were many awful things to gloss over, such as prolonged suffering (e.g. it was reported that poisoned weka took up to 18 hours to die, possums up to 97 hours, lizards up to 75 days) and descriptions of symptoms (“convulsions with coughing or squeaking” (in rabbits)). Ethicist Dr Mark Fisher stated at the time: “1080 presents a significant welfare risk – poisoned animals experience several hours of compromised welfare and death, and possible pathological effects in surviving animals. This risk, not just to possums but many other species, should be acknowledged and considered”.

Cruelty remained unaddressed, with researchers Green & Rohan (2012) finding that animal welfare was “essentially ignored” in public information from the Department of Conservation (DoC) and other poisoning agencies.

Supporters of 1080 and those who care about animals should get acquainted with the facts. This poison is very broad spectrum – it doesn’t only kill the animals that DoC is “targeting”, and it causes a prolonged, severe welfare impact. To call it “moderately humane” is incorrect and abhorrent.